Tyto alba
Strigiformes
Owls have an upright posture, large heads, forward-facing eyes, and strong, sharp bills with a pronounced downward curve. Most are nocturnal or semi-nocturnal. Exceptional low-light vision and keen directional hearing enable them to pinpoint the location of prey. Owls typically have extensive feathering, with feathers often extending to the tips of the toes. Cryptically colored and patterned plumage helps to camouflage them as they rest by day. Their dense, soft feathers allow them to fly silently. The world's two owl families are both represented in Washington:
Tytonidae
The family Tytonidae is a widely distributed family of owls, inhabiting woodlands, farmlands, and savannas on every continent except Antarctica. There is one North American representative—the Barn Owl. This species is very similar to the typical owls (Strigidae) in habits and functions. Most of the differences between the two groups are structural. The facial disks of Barn Owls are more heart-shaped, rather than round, and their heads are longer and narrower overall. They have longer legs than typical owls.
Uncommon to fairly common resident.
Source of Bird Audio

The Barn Owl is a gray-and-tawny owl with a white, heart-shaped face and dark eyes. It has long legs. This owl is mostly white underneath, but may be buffy or spotted on its breast. The male and female look similar, but the female tends to be more densely spotted or darker below. The female is slightly larger than the male, generally with a rounder face.

Barn Owls occur worldwide, and are usually found in open or semi-open habitats. In Washington, they are closely associated with agricultural areas or basalt cliffs, as well as forest openings, wetlands, and other relatively large, open spaces. In winter, they roost in dense conifers or barns.

Barn Owls bob their heads and weave back and forth, giving them a spooky appearance. They hunt mostly at night, flying low over open ground, listening and watching for prey. Their vision is adapted for low light levels, and their hearing is highly precise. Barn Owls can accurately locate prey entirely by sound and strike successfully in total darkness. No other animal tested has as great an ability to locate prey by sound.

Small mammals (mostly rodents) are the main prey. When voles are abundant, they become a major source of food, and in these years, some Barn Owls may be able to raise additional broods.

The male attracts a female with a display flight, and brings food to the female during courtship, which begins in winter. They form a long-term pair bond (that often lasts as long as both members are alive), and nesting begins early in the year, with most egg-laying between March and May. Nests are located on cliffs, in haystacks, hollow trees, burrows in irrigation canals, or in barns, old buildings, or other cavities. Barn Owls use barns and buildings less often in eastern Washington than in other parts of their range, as many of these nesting sites have been taken over by Great Horned Owls. They do not build a true nest, but much of the debris around the nest, including pellets, is formed into a depression. The female lays 2-11 eggs (usually about 5), and incubates them for 29-34 days. She begins to incubate as soon as the first egg is laid, so the young hatch 2-3 days apart. The male brings her food while she incubates. In the first two weeks after the young hatch, the female stays on the nest to brood them, and the male brings food for the female and the owlets. He delivers the food to the female, and she feeds the young. After about two weeks, the female begins to leave the young and hunt as well. The young first start to fly at about 60 days, although they return to the nest site at night for a few more weeks. Barn Owls generally raise one or two broods per year, but when food is abundant, they may raise three.

Barn Owls are considered resident, but some young birds wander great distances. Migratory movements have been recorded in both juvenile and adult birds.

There is general concern that this widespread species is declining, but owls are difficult to survey for population trends. They seem to be expanding their range in the lower Columbia Basin. They do not appear to do well in harsh winters, and die-offs are often observed in severe winters, which may limit their numbers in some parts of Washington. As human populations continue to expand, more and more habitat is destroyed, although Barn Owls do respond well to nest-box programs. In recent years, farmers have begun to recognize their value for pest control (a family of Barn Owls can kill about 1,300 rats a year) and have provided nesting sites, which may help in the face of habitat destruction. Roadside collisions are a major cause of mortality and may threaten population levels in some areas. 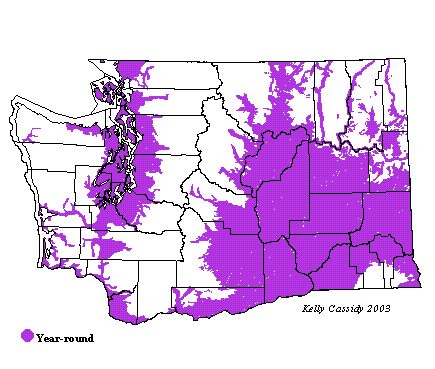